Filming is finally underway on the delayed tenth season of American Horror Story, and creator Ryan Murphy has shared a first-look picture of one of the new cast members—Home Alone star Macaulay Culkin!

“Something wicked this way comes,” Murphy captioned the Instagram photo, which shows Culkin hanging out with series regular Leslie Grossman. 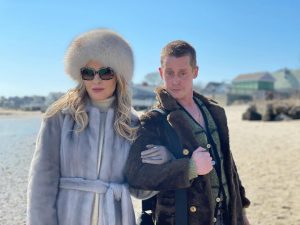 Other returning cast members this season include Evan Peters, Kathy Bates, Billie Lourd, Finn Wittrock, Lily Rabe, Adina Porter, and Angelica Ross. No official word yet on the tenth season’s theme, though the beach setting in the behind-the-scenes photo may provide a clue… Only time will tell!