First Look at Images from I Spit on Your Grave 3

Vengeance still belongs to Sarah Butler as she returns in the sequel to the remake of I Spit on Your Grave. Picking up where the first film left off, Sarah Butler is still plagued by memories of her sexual assault and embarks on another revenge-fuelled attack when her friend’s murderer gets off the hook. That sounds understandable, right? I, for one, will always approve of films that focus on a woman trying to get even. 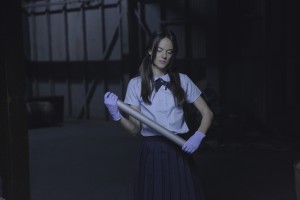 Synopsis:
Jennifer Hills (Sarah Butler) is still tormented by the brutal sexual assault she endured years ago (I SPIT ON YOUR GRAVE 2010). She’s changed identities and cities, reluctantly joining a support group where she begins to piece together a new life. But when her new friend’s murderer goes free and the tales of serial rapists haunt her, Jennifer will hunt down the men responsible and do what the system won’t – make them pay for their crimes in the most horrific ways imaginable. Only this time, no jury may be able to save her.

In the images Sarah is poised and ready to wreak her vengeance, a man looks worse for wear as he bleeds profusely and a couple of police offers look genuinely stunned. I wonder what they’ve seen…

Take a look below and be sure to purchase I Spit on Your Grave 3 when it is released on DVD on 26th October 2015. 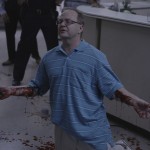 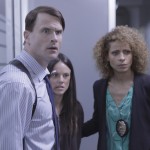