As part of its recent summer movie preview, USA Today shared the first image from Don’t Breathe 2. In it, the Blind Man is still alive and well—and armed. 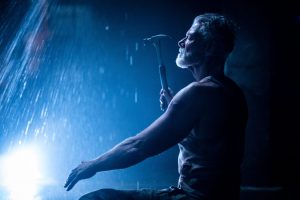 The sequel to Fede Alvarez’s 2016 home invasion horror, Don’t Breathe 2 was directed by the original film’s co-writer, Rodo Sayagues. The sequel will reveal that the Blind Man has been hiding out in an isolated cabin for years, and has taken in and raised a young girl orphaned from a house fire. But their quiet existence is shattered when a group of kidnappers show up and take the girl, forcing the Blind Man to leave his safe haven to save her.

Hold your breath, because Don’t Breathe 2 is coming to theatres on August 13th. We’ll keep our eyes peeled for a trailer to share with you!