Mathieu Turi (Hostile) is back with a new sci-fi thriller called Meander, and courtesy of Variety, we just got our first look (above).

The film stars Gaia Weiss (Vikings) as a woman who wakes up in a strange labyrinth filled with deadly traps. She has to move forward to survive—but how far can she get? 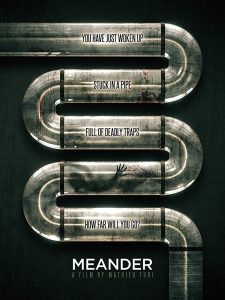 Turi wrote and directed the English-language film, which also stars Weiss’s Vikings co-star Peter Franzen as a man with mysterious intentions. Gregory Chambet from WTFilms, which is co-producing and handling worldwide sales, described the film as a “contained concept” reminiscent of Vincenzo Natali’s Cube.