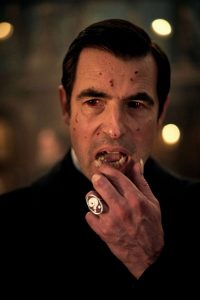 This one’s for you, children of the night! Here’s your first look at Claes Bang (The Girl in the Spider’s Web) as the titular bloodsucker in the BBC and Netflix’s upcoming horror-drama series Dracula.

Consisting of three 90-minute episodes, Dracula is inspired by the classic Bram Stoker novel of the same name and is set in 1897. The series is written and created by Steven Moffat and Mark Gatiss, and depending on your feelings about Sherlock, you have permission to stop reading right now if you choose. Jonny Campbell, Damon Thomas, and Paul McGuigan are directing.

The series is expected to creep out of the coffin later this year or in early 2020.