First Look at Brahms in The Boy 2

The first image has been unveiled from The Boy 2 and it shows the return of Brahms. Oh no! He’s being dug up and that only means one thing: more terrifying events are on the way for a family who’ve made a terrible mistake. 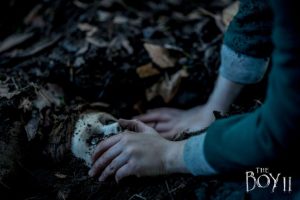 Directed once again by William Brent Bell, the film follows a family who moves in to the Heelshire Mansion unaware of its haunting past. When Convery’s character befriends the lifelike doll Brahms, strange things start to happen.

The Boy was a pleasant surprise and featured a twisting and frequently eerie tale of a haunted doll, but the last thing I expected was the film to get a sequel. Considering how the film ended – with that shocking reveal – this one will certainly have to take a different approach.