It’s not the Beetlejuice sequel that we’ve all been waiting for, but Beetlejuice is set to return when the musical takes to Broadway next year. We now have the first look at actor Alex Brightman who will be playing the role made famous by Michael Keaton in 1988. 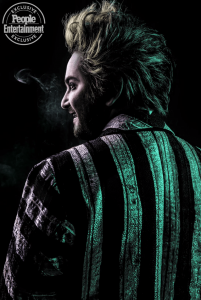 If you think that Brightman is going to be doing his best impression of Keaton’s interpretation then you’re wrong, because he’s set to make the role his own. When speaking about this new ghost with the most, director Alex Timbers said:
“[His Beetlejuice] is definitely not a Michael Keaton impression. It’s his own. It’s filtered through the sensibility of Alex Brightman. […] There are Easter eggs from the film, and what I want to do is pass the sniff test for fans, but I want it to feel like its own surprising, exciting piece of theatre.”

Eddie Perfect has written the score for the musical that will hit the stage at Washington’s National Theatre on 4th November.