The first stills have come in for upcoming indie horror Amityville Terror, and they’re pretty damn creepy. Just check out that face peering in at the door. The film is due for release this year, no doubt to capitalize on Maniac (2012) director Frank Khalfoun’s higher profile Amityville: The Awakening, also coming in 2016. Directed by Michael Angelo (yes, really), the film is written by actor Amanda Barton (Dracula’s Curse), who also stars alongside Nicole Tompkins, Kaiwi Lyman and Tonya Kay. 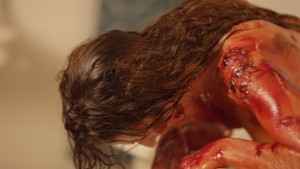 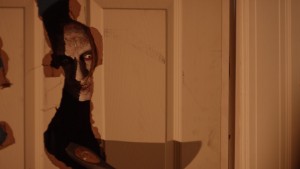 The synopsis, released by distributor Uncork’d Entertainment reads like this:
When a new family moves to an old house in Amityville, they are tormented and tortured by an evil spirit living in their house, and trapped by the malicious townspeople who want to keep them there.

Further details of the film though, remain sketchy.

The famous Long Island house where Ronald DeFeo Jr. shot his parents and four siblings in 1974 continues to fascinate those with an interest in the macabre, and there seems no end in sight to the 35-plus-year popularity of films inspired by its history. So far, no less than fifteen films have been inspired in some capacity by the families who have lived there.