The production of Jeepers Creepers 3 wrapped a few months ago, but a title is yet to be announced. We do know that it will not be following the previously suggested Cathedral storyline and will actually be a prequel of sorts; taking place between the first and second film.

You can check out the first image from the film below, which shows Stan Shaw (Cutthroat Island, Snake Eyes) in his role of Sheriff Tashtego. He’s looking a bit worse for wear and the hand that’s gripping him probably has something to do with it. 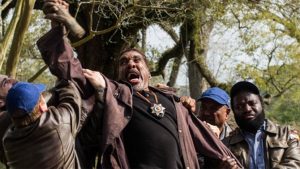 That’s all we know… Can we please have a trailer?