First Image Released from The Conjuring 2 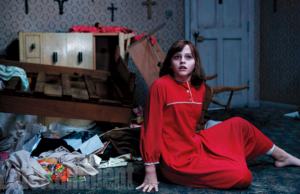 Ed and Lorraine Warren are back doing what they do best in the upcoming horror sequel The Conjuring 2. In this entry the paranormal investigators travel to London to visit Peggy and her four children who have started experiencing unexplainable, scary goings-on in their home.

The first image from the film has now been released and it shows Janet (Madison Wolfe) looking as though she’s just seen a ghost. The room could also do with a bit of a tidy, because that’s one hell of a mess that’s been made.

The Conjuring 2 will open with the infamous Amityville Horror haunting from 1974, before it tells the true story of the Enfield poltergeist from 1977. Could this mean that the film will try to tie together these two cases of paranormal activity, despite them being thousands of miles away from each other?