Global Group have released a first look at horror icon Robert Englund in upcoming chiller Nightworld. Headed to the European Film Market in Berlin, the film is directed by Chilean Patricio Valladares (Hidden in The Woods), and is one of three horror films he currently has in production. 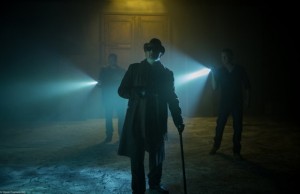 Synopsis:
“When Former LAPD Office, Brett Irlam takes a job as head of security at an old apartment building in Bulgaria’s capital, Sofia, he soon begins to experience a series of bizarre and terrifying events. Once he begins to delve deep into the building’s sinister history, and investigate it’s shadowy owners and past employees, Brett soon uncovers a malevolent force nestled deep in the bowels of the building in basement that will do anything to be set free into our world.”

As well as Nightworld, Englund is soon to be seen in Echo of Evil for Lake Eerie director Chris Majors and Harrison Smith’s hotly anticipated ‘Expendables of horror’ Death House.