We’ve got the first image from the He Never Died sequel and it teases the film’s new leading lady. With Jason Krawczyk stepping away from directing the follow-up to his horror-comedy He Never Died, the reins were left hanging and Audrey Cummings stepped in to take the helm. 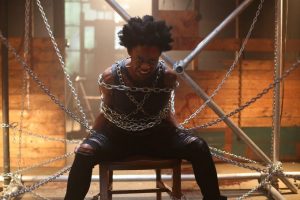 Henry Rollins is not returning for the sequel and, instead, Olunike Adeliyi will be at this film’s focus. Adeliyi will star as an immortal cannibal who saves a woman from an untimely death, vowing to hunt down those that were responsible.

Audrey Cummings’ previous efforts include 2014’s horror-thriller Tormented and 2017’s sci-fi-fantasy Darken, the latter of which starred Adeliyi. Adeliyi has previously starred in Three Days in Havana and will also feature in the upcoming second season of American Gods and Doug Liman’s adaptation of Chaos Walking.