First Image of Frank Grillo in Beyond Skyline

The sequel we’re all waiting for – or, maybe not – is the follow-up to 2010’s Skyline. Surprisingly, Beyond Skyline is beginning to sound a lot better than its predecessor, so we may be looking at a rare event where the sequel is better than the original. 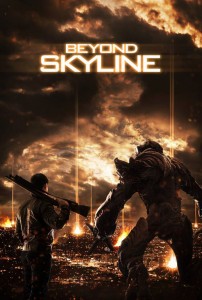 This new image shows Frank Grillo armed with a shotgun. Perhaps I’ve been watching a bit too much Daredevil, but he looks a helluva lot like The Punisher. Grillo has been featured in quite a few horror flicks lately, including The Purge: Anarchy and James Wan’s Demonic, and he’s also set to star in The Purge: Election Year.

Not only is Frank Grillo starring, but so are a couple of stars from the Indonesian action masterpiece The Raid:  Iko Uwais, who will be the leader of an underground resistance and Yayan Ruhian. Producer Greg Strause (Skyline) spoke about the addition of these fighting superstars when he said, “We’re showcasing a new kind of alien combat, so who better to collaborate with than the most innovative fight team in the world?” Damn right. Hopefully, some awesome fighting sequences can help elevate Beyond Skyline or it’s just going to be another disappointing sci-fi flop.