Since returning to the horror genre with You’re Next in 2011 Barbara Crampton, who made her name in Stuart Gordon’s ‘80s cult classics Re-Animator and From Beyond, has made one hell of a comeback. Following up You’re Next with a string of impressive genre credits including We Are Still Here and Road Games, she seems to have fully cemented her position as one of modern horror’s true icons. 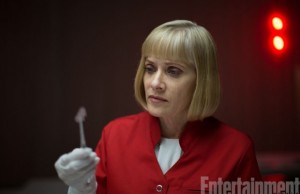 One of a number of upcoming roles sees Crampton playing Dr. Rafaela Crober in Replace, from which these stills are taken. They come courtesy of EW, and give us our first glimpse of Crampton’s character in the film. Directed by Norbert Keil, the horror-thriller also stars Rebecca Forsythe as Kira Mabon, a young woman afflicted by a strange disease that causes her to age rapidly. She soon discovers however, that she can slow the effects of the disease and maintain her youth and beauty by replacing her own skin with the flesh of others.

Keil also wrote Replace, his first horror feature, together with Scarlett Amaris and Richard Stanley, the director of Hardware and Dust Devil! Pretty cool, no?