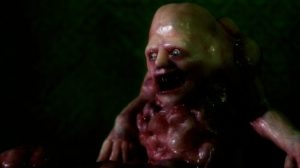 A festival trailer for Sheffield’s upcoming Celluloid Screams has been released, and it contains a glimpse of something rather exciting. Among the selection of clips on display is a brief shot from Belial’s Dream, a new animated short featuring the iconic character from Frank Henenlotter’s demented trash masterpiece Basket Case. You can see Belial at around the 1m 41s mark in the trailer.

“In this continuation of the Basket Case saga,” reads the Celluloid Screams website, “Belial has a rather unsavoury dream…” The 5 minute film was directed by animator Robert Morgan, who has created a number of horror shorts, including the ABCs of Death 2 segment D is for Deloused.

Belial’s Dream will play before a 40th Anniversary screening of Suspiria, screened in its new 4K restoration.

Other films appearing at Celluloid Screams include Tragedy Girls, 68 Kill, Better Watch Out and a 30th Anniversary screening of Hellraiser. The festival takes place from 20th – 22nd October at Sheffield’s Showroom Cinema.