Not so long ago we reported that 1997 festive slasher Jack Frost was heading to blu-ray from Vinegar Syndrome. It’s now been announced that hot on the heels of that December 13th release, the film will be screened on 35mm for the first time ever. 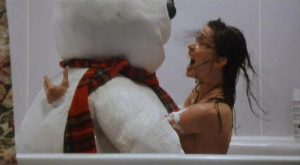 The cult straight-to-video flick tells the seasonal tale of a serial killer who, on his way to be executed, is involved in a road accident with a chemical waste truck. He is (of course!) promptly transformed into a murderous, morphing snowman who slays and quips his way through the small town of Snomonton (“The snowman capital of the Midwest”), seeking revenge on the sheriff who caught him.

Almost twenty years since landing on VHS, Jack Frost will grace the big screen for the first time on December 21st at Cinematic Void on Hollywood Boulevard in Los Angeles, presented by Vinegar Syndrome, Alamo Drafthouse LA and It Came from the VCR. Director Michael Cooney (who wrote 2003 twisty horror-thriller Identity) will be in attendance along with star Scott MacDonald, who played the icy bastard of the film’s title. Original props from the film will also be on display at the event. 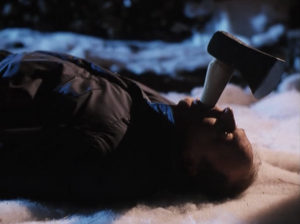 Don’t hold your breath for such treatment of 2000’s Jack Frost 2: Revenge of the Mutant Killer Snowman.