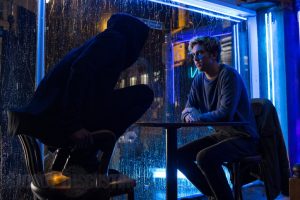 Yesterday the first teaser for Adam Wingard’s (Blair Witch, VHS) Death Note adaptation was unleashed and now we have the first image from the film, courtesy of Bloody Disgusting. The image shows a meeting between L (Keith Stanfield – Get Out) and Light Turner (Nat Wolff – Paper Towns). It’s a beautifully lit shot with contrasting brights and darks to reflect the film’s clashing of moral rights and wrongs. Is it OK to kill people if you think they deserve it?

Synopsis:
Death Note follows a high school student who comes across a supernatural notebook, realising it holds within it a great power; if the owner inscribes someone’s name into it while picturing their face, he or she will die. Intoxicated with his new godlike abilities, the young man begins to kill those he deems unworthy of life.

Death Note will be available on Netflix from 25th August. If you haven’t seen the original series, then you can check that out on Netflix right now to familiarise yourself with the story.