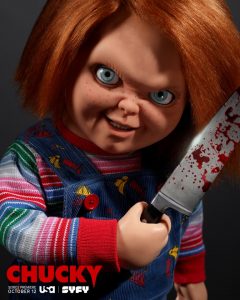 From franchise creator Don Mancini, Chucky is coming to USA and SYFY on October 12th—and the first teaser trailer (below) gives a new home to a very bad Good Guy doll!

The series will see the vintage doll turning up at a suburban yard sale, plunging an idyllic American town into chaos as a series of horrifying murders begin to expose the town’s hypocrisies and secrets. Meanwhile, the arrival of enemies—and allies—from Chucky’s past threatens to expose the truth behind the killings, as well as the demon doll’s untold origins as a seemingly ordinary child who somehow became this notorious monster.

Brad Dourif is back to voice the titular killer doll in Chucky, which is executive produced by Channel Zero mastermind Nick Antosca. Other returning cast members include Jennifer Tilly as Tiffany, Fiona Dourif as Nica Pierce, Alex Vincent as Andy Barclay, and Christine Elise as Kyle. The series will also feature Devon Sawa (Final Destination) and will continue several plotlines from the films.

“Over the years, I’ve heard that the consensus fan favourite among all the movies is Child’s Play 2,” Mancini recently told Entertainment Weekly. “I think one of the reasons for that is how Chucky looked in that movie and how the late director John Lafia, who passed away last year, shot Chucky. Our goal with the series was to bring Chucky’s look precisely back to that. Tony Gardner and Peter Chevako (special effects artists responsible for creating the show’s puppets) have done a great job. I think fans are really going to love that.”