Fiona Dourif heads out into the woods for a doomed camping trip in Enclosure, an upcoming horror thriller from director Patrick Rea (Nailbiter), and we’ve got the first few stills for you. 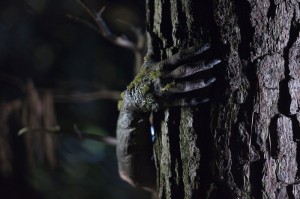 Dourif (Curse of Chucky, Fear Clinic) stars alongside fellow genre regular Jake Busey (Identity, From Dusk Till Dawn: The Series) in the film, which pits the two (playing Dana and Sean) against a forest-dwelling monster.

“A couple’s romantic camping trip is cut short after a group of nearby hunters are brutally killed by a mysterious creature. As the creature turns its focus on the couple, they must fight for their survival while their shelter is destroyed. Secrets and supernatural stories come to light, and they must determine if the real threat is inside or outside their enclosure.”

Enclosure will arrive sometime this year, although no release date has yet been set.