Fast-rising young star Finn Wolfhard may be best known for the Amblin-influenced Stranger Things, but next up he’ll be starring in an actual Amblin film, having just been cast in haunted house tale The Turning. 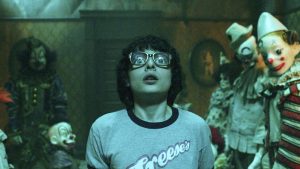 Wolfhard joins the already-cast Mackenzie Davis (Blade Runner 2049) in the film, which is a loose adaptation of Henry James’s novella The Turn of the Screw. The film tells of a young nanny hired to take care of two young orphans in a country mansion. Soon after arriving however, the nanny becomes convinced that the house is haunted. Wolfhard will be playing one of the two children.

Directing is The Runaways helmer Floria Sigismondi, who has also directed countless music videos for artists including David Bowie, Marilyn Manson and The Cure. Jade Bartlett wrote the current version of the script from Chad and Carey Hayes’ (House of Wax, The Conjuring 2) original draft. Scott Bernstein and Roy Lee are producing.

Production on The Turning is expected to start early in 2018.