The Final Trailer for Outlast 2 is CREEPY

Outlast 2 is out now and we’re expecting most of you to be playing it, rather than watching its trailers. However, for those of you who may have let the game’s release slip their minds, here is the final and extremely creepy trailer. 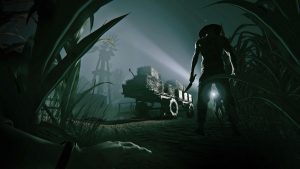 It was sad news when Outlast 2 was postponed to 2017, but now that the time is upon us it feels like no time at all. Alas, it has been 4 whole years since the first Outlast scared our socks off and we are, sort of, relieved to finally have a new game to play and story to unfold in the Outlast universe. Even if it’s going to be absolutely terrifying.

Check out the trailer below, it features a creepy singing child, creepy visuals and an atmosphere laced with creeping dread. We think the image of the shower pouring blood is one of the most striking moments in the trailer, what do you think?

Outlast 2 is out NOW!