The Final Thrilling Trailer is Released for Arrival

The final trailer has been released for the extra-terrestrial drama Arrival starring Amy Adams, Forest Whittaker and Jeremy Renner. The trailer is exciting and enthralling showing the moment the aliens land and the days following where Dr Louise Banks is faced with deciphering their language in the hope of discovering why they have arrived. 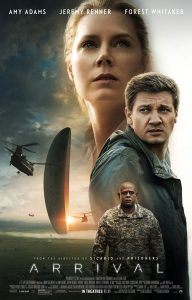 When mysterious spacecraft touch down across the globe, an elite team – lead by expert linguist Louise Banks (Amy Adams) – are brought together to investigate. As mankind teeters on the verge of global war, Banks and the team race against time for answers – and to find them, she will take a chance that could threaten her life, and quite possibly humanity.

We recently caught Arrival at LFF and thought it was excellent. It’s an unpredictable watch filled with drama and intensity, and the entire cast are phenomenal. With Denis Villeneuve at the film you’d be right to expect stunning cinematography and visuals to accompany the film’s interior depth. It also has a breath-taking ending. You can check out our 4.5 star review here.

Arrival will be released in the UK on 10th November and the USA on 11th November.