In the early to mid-2000s French cinema reached the cutting edge of horror. The often brutal and shockingly violent films captivated audiences worldwide. Horror had been in a slump and this was a breath of fresh air. The pinnacle of these titles was High Tension and Martyrs. Alexandra West takes a look at the movement with Films of the New French Extremity: Visceral Horror and National Identity. Torture porn was the horror standard in the U.S. at the time, with the yearly Saw movies dominating the horror box office. A number of French movies took things to the next level in both originality and violence. The movies covered in the most detail include the ones previously mentioned as well as Irreversible, Inside, and Them. The author examines 22 films altogether.

Our author introduces us to French cultural and cinema history to set the scene for this movement. There is a fair amount of actual history included since French history offers plenty of real life bloody stories. The themes of horror films are a reflection of the society and the times in which they were created. The social anxieties of the day are brought to the screen in metaphors. For example, Dawn of the Dead displays the late 70s love of consumerism; The Fly’s body horror can be seen as a response to 80s anxiety about AIDS. This is also the case for the movies of the New French Extremity. The bleakness portrayed reflects French societal worries such as fears of immigrants, changes in social class, and the fading of traditional French culture.

Sexuality and gender are also key themes of these French films. The sex is unglamorous and uncomfortable, and is frequently portrayed and often coupled with violence. Female gender issues include pregnancy, motherhood, and the female body. Many of the films feature a resilient and powerful female protagonist.

West talks about the directors behind the movement, notably Gaspar Noé , Alexandre Aja, and Pascal Laugier. My personal favourite of this wave of films was Frontier(s). It began in the chaos of riots in Paris and featured a psychotic Nazi family, mirroring the lunatic Sawyers from The Texas Chainsaw Massacre.

I most enjoyed the two chapters on Martyrs and Inside. Martyrs is one of the most unpleasant films to watch and truly shocking in its violence and suffering. It’s the kind of traumatising film that can make you question why you put yourself through it. Inside is incredibly frightening – what could be more perilous than a pregnant woman fighting for the life of her child and her self? 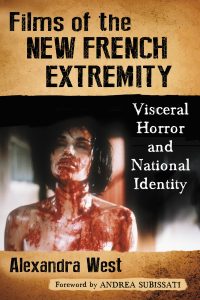 These movies were not expected to find such worldwide acclaim. First, the film world generally regards horror as a sub-class of art. Second, the fact that they are French language films added yet another barrier to their success. However, succeed they did. It’s worth noting that this is a fairly academic examination of the movement. It features plenty of historical and cultural discussion, but that is not to say that it’s boring in any way. It may not be for the casual reader, but if you’re interested in the topic, I haven’t found a more in-depth examination. After reading this book I am going to go back and revisit the films I enjoyed with a new perspective.