Filming has wrapped on the sequel to 2012’s Prometheus, Alien: Covenant, with the next phase of post-production set to commence. The @AlienAnthology Twitter account tweeted a brand new photo from the film’s set which shows a laughing Katherine Waterston and Ridley Scott. 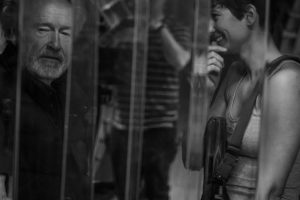 Synopsis:
Ridley Scott returns to the universe he created in ‘Alien’ with ‘Alien: Covenant’, the second chapter in a prequel trilogy that began with ‘Prometheus’ — and connects directly to Scott’s 1979 seminal work of science fiction. Bound for a remote planet on the far side of the galaxy, the crew of the colony ship Covenant discovers what they think is an uncharted paradise, but is actually a dark, dangerous world — whose sole inhabitant is the “synthetic” David (Michael Fassbender), survivor of the doomed Prometheus expedition.

It’s very exciting to hear that we’re getting ever closer to discovering what happened after the events of Prometheus and what exactly David has been up to since the horrific expedition. Waterston looks like she’s Covenant’s Ellen Ripley, with her short hair and weapon reminding us of the character portrayed by Sigourney Weaver in Alien and its sequel Aliens.

Alien: Covenant will be with us in a little over a year on 4th August 2017.