Fight for our Planet in the Trailer for Captive State 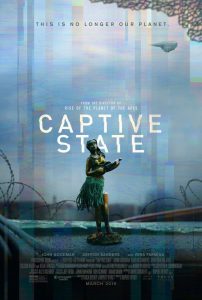 Rise of the Planet of the Apes director Rupert Wyatt is entering a very different world of war in the sci-fi-thriller Captive State. Wyatt has already proven that he can craft exciting, intense and emotional battles with his previous efforts, but in this one, the humans may be the good guys.

This isn’t your typical battle for the planet however, because this as much like The Purge and District 9 as it is like War of the Worlds. Set 10 years after aliens have occupied the earth, Captive State follows a group of revolutionaries that want to take the world back.

Check out the trailer below; it looks like it could be the sci-fi spectacle of 2019. It stars John Goodman, Vera Farmiga, Madeline Brewer, Ashton Sanders, Jonathan Majors, Machine Gun Kelly and Kevin J. O’Connor. Captive State will land on 29th March 2019.