Synopsis:
A female vampire leads the men she lusts after to their demise as her lust for flesh overtakes her desire to love.

Let’s get this straight from the beginning; Female Vampire is softcore porn. Lina Romay is nude for 99% of the time she is on-screen. During these times she’s either writhing around on a bed, writhing around in a bath tub or writhing around with other people – I’m careful not to say “men” here – in various different places. There is very little below its simple surface that, quite clearly, wants to showcase a young woman’s body and disguise these intentions as a thoughtful exploration of loneliness and vampirism. Don’t let it fool you, this is nothing more than a poorly made, dated and criminally bloodless attempt at shocking audiences with sex and nudity.

I’m certain that director Jesus Franco believes that he is empowering this bare breasted countess, Irina Karlstein, as she uses her sexuality to lure her male and female victims to their deaths. I’m sure that as the camera slowly pans up and down her naked body, slowly lingering on her breasts, her vagina and then back up to her breasts again, Franco believes he is making a significant, thoughtful comment on the power of the female body. “Look at this beautiful naked lady, everyone! Doesn’t she just exude strength?” No, not really. Parading a naked woman on-screen in a manner such as this lets her become a victim of the male gaze, rather than a true symbol of female empowerment. The film move in a dreamy fashion from one sex scene to another, leaving little to the imagination and leading me to question whether this is a vampire film at all. Not an ounce of blood has been shed; Irina’s lust is for a different bodily fluid, because Female Vampire has not been the definition of a teenage boy’s wet dream enough already.

Female Vampire presents a woman’s sexuality as something to fear rather than praise, by suggesting that it is her unquenchable desire for sex that prevents her from being able to find true love. As Anna Biller so wonderfully examined in her love letter to ’60s cinema, The Love Witch, it is quite possible to craft a complex female character who uses sex as a weapon in a liberating manner. Both films use narration to give their audiences an insight into their monstrous minds, but Female Vampire is without The Love Witch’s intelligent exploration of seduction and sexuality. Whereas Elaine is a complicated soul who falls for the wrong men, so that their deaths become satisfying, Irina’s victims are nobodies. She tells us during her wistful narration that she wants nothing more than to be in a peaceful relationship, but the film is without the events to convince us that this is a credible truth. Elaine is painted as a woman who genuinely seeks out true love and it is easy to empathise with her darkly comedic inability to leave her lovers alive, but Irina is devoid of personality, charm or likeability. It doesn’t help that the poor woman is mute, which only leads me to think that Franco and his co-writer Josyane Gibert couldn’t be bothered to give her any dialogue, because her voice is so superfluous.

Irina’s narration works as an attempt to garner empathy for the audience and to encourage us to see that there’s humanity in this vampire body. However, it’s a hapless task to persuade us that this film is truly an examination of loneliness, rather than the brazen and unashamedly pornographic exercise that it so clearly is. Sure, there’s a certain amount of sadness in Irina’s eyes that imply she’s unhappy with her situation, but it could also be a sign of the genuine despair felt by an actress who has been reduced to a plaything for a director that is purely interested in only entertaining himself. Just as the camera lingers at a distance from Irina’s acts of love-death to create a feeling of voyeurism, as an audience, we feel wholly uncomfortable watching the lengthy, depth-less, endless scenes of sex, making Female Vampire a frustrating, infuriating and mind-numbing 95 minutes with no happy ending. 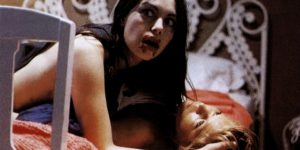