Synopsis:
A group venture into the woods for a chance at an easy cash-grab, but they aren’t prepared for the horrors that await them. They stumble upon ground they should never have stepped on and find themselves caught up in evil forces that are determined for them to meet their demise. 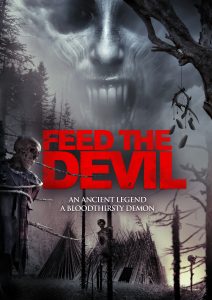 The strongest aspect of Feed The Devil lies within its technical achievements. From the start the film embodies a gorgeous visual style and this aspect is carried throughout with its cinematography never dipping in quality. The beautifully sinister forest landscape and freezing temperatures make for a perfect backdrop for the terrifying events that unravel, heightening the story’s ice-cold interpretation of a slasher-monster flick. As darkness takes over and our characters’ situations become increasingly daunting, the location is consistently used as a stark contrast to emphasise the horrors that our trio are facing, proving that an attractive setting can be home to dark, ominous and threatening circumstances.

Feed The Devil’s story is ultimately grounded in the idea that you will be punished for stepping on land that does not belong to you. Much like Cannibal Holocaust – but, minus the found footage aesthetic –it captures a feeling of intensity, inescapability and claustrophobia through its depiction of fighting for survival. Although it is very much more a cat-and-mouse tale, similarities between Ruggero Deodato’s fearless cannibal horror and this one, lie in their shared shaky camera work and overall concern with depicting harsh reality. It is without the striking shocks, however, because of course this type of tale feels as old as time by now, but it is clear that director Max Perrier has an appreciation for bringing his horrors in to a space that is both scary and frighteningly real.

The frights in Feed The Devil aren’t going to be waking you up in a cold sweat, but there are more than a few well-executed scenes that pit our heroes against wolves and ancient Indians that are armed with clubs. Again, this is where the film’s location works well as the dangers are mostly presented off-screen, allowing suspense to be built before they are unleashed on-screen to craft more than a few effectively jumpy moments. There is nothing mind-blowing in Feed The Devil’s scares, but there is plenty of stone-cold intensity laced throughout. The chilling and formidable score composed by Miksa Kovek elevates the film’s fierceness to breaking point. It feels and sounds like a creeping assault that mirrors the aggression that occurs on-screen; it is a superb accompaniment to the horror and a surprisingly original sound overall.

Beginning as a film that paints a touching portrait of its “hero” Marcus (Jared Cohn) – we are lead to believe he wants to escape his tough life at home – Feed The Devil soon abandons this promising depiction that could trigger empathy for reasons unknown. Marcus is soon seen as just another selfish and narrow-minded fool who refuses to see sense and makes frequent poor decisions. Of course, we are used to the stupid decisions that our characters will make in horror films, because that’s where half the fun lies. We love to see the slasher chaser its victim up the stairs and it’s always a joy when we here the phrase, “let’s split up!” However, there is a metaphorical line that some films should not cross and Feed The Devil manages to overstep the mark from acceptable stupidity into plain foolishness. When Marcus’ girlfriend Stella (Victoria Curtain) disappears, the police should have been called. When they find mutilated bodies in the forest, they should have got the hell out of there. When a mysterious woman appears with Stella’s shoe, you do not abandon Stella’s sister Lydia (Ardis Barrow) and head off into the unknown with this strange woman. Again, I’m all for the silly mistakes that characters make, but when it all boils down to purely “protecting the weed/saving the weed” that the group are searching for it just feels too ridiculous. 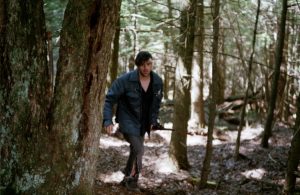 The contradictions fly as Marcus seeks to find Stella and declares his love for her, but refuses to actually help her and, instead, ventures off into the woods on an almost nonsensical tangent. He very much should have given up on this hopeless task, but I suppose there is a certain amount of bravery within this character’s chest that should be appreciated. His characterisation could be classed as a spin on the “final girl”, because he does embody many of the traits you would expect from the last surviving female character and is more than just the typical jock-type. That isn’t to say that he’s as heroic and positively presented as he should be, but he has at least been created to insight more than just pure annoyance in the audience and that’s something in itself. He becomes someone we are supposed to hate to give a reason for the traumatic experience he is about to undergo, because at the centre of Feed The Devil there is another moral that reminds us to steer clear from land that does not belong to us. Heed the warnings of those who know better and don’t shun those that do not speak your language, because dear white people, you will be punished for your ignorance.

Feed The Devil is a competent and confident addition to horror from Max Perrier and proves that running through the woods still has the ability to shock, scare and surprise. This is definitely an impressive demonstration of intensity that is filled with fun jumps and scares.