Fede Alvarez has taken to Twitter to show-off an alternative poster for his upcoming horror-thriller Don’t Breathe. It’s brilliant, especially if you’ve seen the film. If you haven’t seen the film yet you’ll miss the symbolism, but you’ll certainly appreciate the otherwise brilliant artwork. It’s something we’d definitely love to hang on our walls. 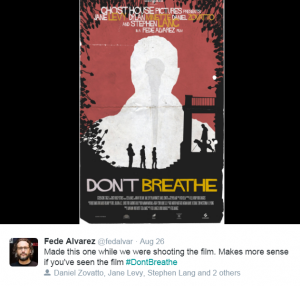 Don’t Breathe follows 3 young folk as they attempt to rob the house of a blind man, realising they’ve made an extremely terrible decision because the dude’s an ex-army vet and can, quite easily, dish out some serious punishment.

Don’t Breathe stars Jane Levy (Evil Dead), Dylan Minnette (Goosebumps, Let Me In) and Daniel Zovatto (It Follows). Stephen Lang plays the role of the terrifyingly badass blind man and the film is directed by Fede Alvarez. We adore Don’t Breathe and would happily argue that it is the best horror-thriller of the year. If not the decade. Check out our 5-star review here.

Don’t Breathe is out now in the USA and will hit UK cinemas on 9th September. Not long now!