Featurette for The Vatican Tapes Will Get Under Your Skin 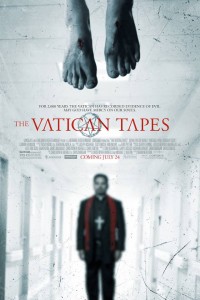 The battle for the world is on in this new featurette for The Vatican Tapes. That’s right, this isn’t a small-town possession which only affects a family and a couple of priests, The Vatican Tape’s central demonic possession threatens the entire world. The possession genre is dying for a refresh and I struggle to think of the last good one to hit our screens.. the first Paranormal Activity, maybe? The Evil Dead remake? Saying The Exorcist is probably a more accurate answer. Either way, considering the amount of these films being spewed out by Hollywood, the good to bad ratio is alarming.

From the featurette below, it looks as though The Vatican Tapes is going all-out in its attempt to create something genuinely frightening. There’s bodily distortion, ominous whispering and lots of screaming. Director Mark Neveldine describes how he wants to get under people’s skin with this addition and, personally, I think he’s succeeded. Whether the film itself will live up to the hype of the featurette, we will have to see but for now, enjoy the featurette and like Michael Pena, keep telling yourself it’s just a movie. You can also check out the trailer below, if you want to skip the cast and crew insight.

The Vatican Tapes will be released on July 24th in the USA, keep an eye out for that UK release date.