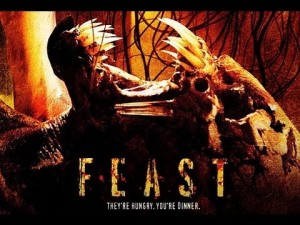 Hell is unleashed upon a small desert tavern as a family of horrific monsters decides to feast on the patrons. Managing to fortify the building, it’s a fight for survival, trying to make it through the night and stay out of the jaws of these beasts.

When it comes to under-rated horror franchises, Feast is at the top of my list. While it is easily comparable to the likes of Tremors, it is a trilogy that I have never heard other people speak about. I picked up the box set of Feast a few years back without knowing anything about it and was pleasantly surprised that it’s not only a fantastic feature film but the sequels stand up too. However for this review I am only covering the first film.

Feast is similar to many other horror films, it has a kinship with the previously mentioned Tremors, it shares the gore and humour of Evil Dead, and it has meta-horror commentary popularised by Scream, yet it’s unique film in it’s own right. It’s through it’s use of meta references in the opening sequence that sets up the film to poke fun at other horror tropes, and prepare us for the subversion of those tropes. Specifically it is the idea of character archetypes and their life spans. It takes the standard horror characters and what we expect from them, and turns it on it’s head. The hero characters and “safe”characters (for example, The Child) are just as much at risk as the standard fodder characters who would be used to pad screen time. What that results in is a film that is wildly unpredictable and hilarious to boot. 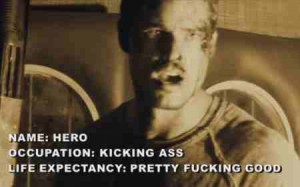 The cast is a mix of relatively unknown actors and a few familiar faces, including Jason Mewes (More well known for his portrayal of Jay, one half of Jay and Silent Bob) and Ex-Black Flag front man, Henry Rollins. Each of the actors manage to give their stereotypical characters a bit of complexity (as long as the survive long enough to do it), turning them into much more interesting characters.

Feast is great for flipping expectations on their heads, not just in the characters but in the way the plot develops. As the group attempt their escape plans, plans you’ve probably seen succeed in similar films, they fall apart and lead to more monster chaos and more wild escape plans.

The monsters in Feast are fantastic, they’re both disgusting and mysterious. Much like how George A. Romero never explained the origin of the zombies in Night of the Living Dead, Feast doesn’t explain where these beasts came from or just what the hell they are, other than walking nightmares. They are killing machines that tear their victims apart, which soaks this movie in gore. It’s not just gore though, the gross-outs are plentiful with vomiting from creatures and victims alike, although the former is bright green and riddled with maggots. It results in a lot of low brow humour but even with all the low brow jokes, it’s still a very clever film.

As I said before, this is the first of three films and they only get crazier yet still as good as the first film with is a rarity when it comes to film franchises. Definitely a favourite of mine and a series that is great for a triple-feature night on the couch with friends. Spread the love and get this film a little more recognition.