Fear The Walking Dead to Return this Summer 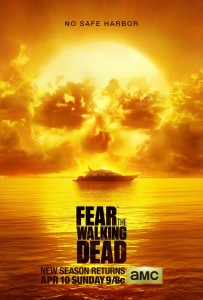 If you’re mourning over the mid-season break of Fear The Walking Dead then fear not, because the show will be back quicker than a blink of an eye! During Monday night’s Talking Dead it was revealed that the show will return to its second season on 21st August, so it’s not too long until we discover what happens to the newly-separated group.

Fear The Walking Dead is a spin-off of the phenomenally popular The Walking Dead, but it’s not had quite the same success – not yet, anyway, but hopefully, the drastic change in the group dynamic will help spur some interesting events for the next half of the season.

If you’re waiting for Rick and co. to return to our screens, that’s not too far off either with Season 7 of The Walking Dead set to air this October.