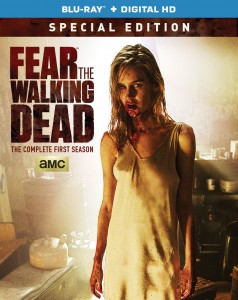 The first season of Fear The Walking Dead was released on DVD and Blu-Ray in the states December of last year, but it has now been announced that the series will be receiving a special 2-disc Blu-Ray and DVD edition this March. As well as featuring all the episodes from Series 1, the special edition will include a huge batch of extras that include a widescreen version of the Pilot episode, deleted scenes, featurettes and audio commentaries.