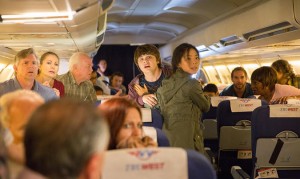 The spin-off series Fear The Walking Dead will be drawing to a close on Sunday 4th October, but AMC have now announced that this will not be the end of the show. Not exactly, anyway. On the same day there will be the beginning of a 16-part web-series titled Fear The Walking Dead: Flight 462, which will take the virus outbreak to the skies. The series has been written by L. Signorino and Mike Zunic, directed by Michael McDonough and you can watch it on AMC.com.

Synopsis:
Fear The Walking Dead: Flight 462 tells the story of a group of passengers aboard a commercial plane during the earliest moments of the outbreak. Over the course of the series, the plane and the lives of its passengers are put in jeopardy once they discover an infected traveller.

When speaking about the upcoming series, Joel Stillerman – President of original programming and development for AMC and SundanceTV said, “Flight 462 is a great extension of the world of ‘Fear’ and will engage fans across multiple platforms with another riveting story set at the start of the fall of civilisation. Watching how they’ll bring one of these new characters to the second season of ‘Fear’ will be really exciting for viewers to follow.”

There really is no end to the world of The Walking Dead and we aren’t complaining. Be sure to tune in to Flight 462 on AMC.com this Sunday.