Synopsis:
Claire is under the grip of a mysterious new cult called Faults. Desperate to be reunited with their daughter, Claire’s parents recruit one of the world’s foremost experts on mind control, Ansel Roth.

The dangerous allure of cults makes the headlines time and again with despairing families trying to rescue their children from the clutches of what they believe to be incongruous beliefs. Dissecting cult dynamics is by no means a new cinematic concept and we’ve seen it examined more often than not in recent years with the likes of Ti West’s The Sacrament and Sean Durkin’s Martha Marcy May Marlene but there’s something strikingly sui generis and captivating about writer/director Riley Stearns’ genre-bending debut, Faults.

Faults’ curtain-raising diner scene is the tastiest hors d’oeuvre since Pulp Fiction’s celebrated “All right, everybody be cool, this is a robbery!” opener. Whilst it’s a hilarious scene, it also serves as the perfect introduction to Leland Orser’s character, Ansel, showing us that he’s clearly in a rut and virtually all of his personality traits shine through in a matter of the first few minutes of the film.

The film is just as deftly constructed from thereon in. Despite limiting the story to a circumscribed space (almost entirely shot in a motel room), Stearns adeptly manages to keep the intrigue and tension high and maintains an underlying feeling of ambiguity, leaving the audience with a real sense of unease.

When the two leads come face to face the film strikes an all new level with both Orser and Mary Elizabeth Winstead putting in fire-stoking performances as the “psychological exorcism” ensues. This is Orser at the pinnacle of his career as the vitriolic yet winsome Ansel, at his very wits’ end, whilst Winstead convincingly creates the alluring, byzantine, cryptic and, at times, chilling Claire.

A particularly impressive point thrown our way is just how swift people are to write cult followers off as poor, gullible indoctrinated members of society and the film provides some serious food for thought. Ansel is clearly bound by his own debts and fear of failure, leaving him with few options in life yet, ironically, he employs his deprogramming techniques to try and reintegrate, persuade and ultimately control Claire who has chosen who and where she is in life out of personal choice. As you can imagine, Stearns plays heavily on this principle and it provides for some truly inspired sardonic humour.

Stearns’ firm focus on the emotional changes in the two lead characters evokes a ticking time-bomb scenario which crescendos to an immense pay off in the breathless final reel, which is much more psychologically perturbing than it is visually violent. It’s a jaw-dropping finale to a film that is sure to persistently catch you off guard throughout.

In short, Faults is a stunning debut with a creepily cryptic, thought-provoking script loaded with caustic satire, all of which is invigorated by absolutely stunning performances. 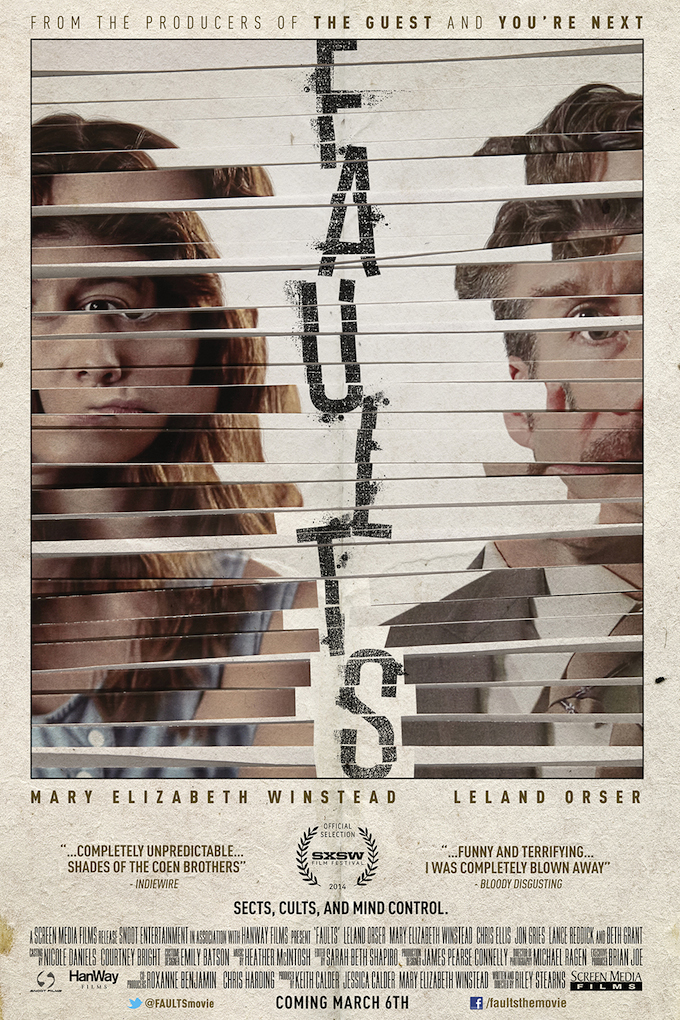