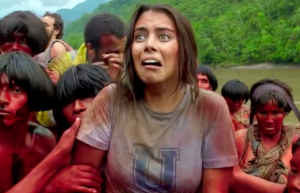 The highly anticipated The Green Inferno was finally given a release date the other day, and now we’ve bagged the first official trailer for the film. It seems the trailer shows that Dad’s always know best, and traveling to the Amazon with disregard to cannibals is not a wise idea.

The Green Inferno will be released in theatres on September 25th 2015.

Synopsis:
One young girl and her friends are convinced they can make a different to the problems in the Amazon by traveling there to try and save the rainforest. Unfortunately for the group, it’s not only animals that roam the dangerous territory; there are also tribes that have the taste for the flesh of humans.