Anthology horror films are almost always uneven, and the V/H/S franchise is no exception. Segments like “Amateur Night” (V/H/S) and “Safe Haven” (V/H/S/2) are unforgettable, while others deserve to be skipped. But though one standout entry can elevate an entire anthology, the latest entry, V/H/S/99, struggles to reach these heights.

Part of the problem is the decision to place the weakest entry upfront where it has nowhere to hide. Maggie Levin’s “Shredding” has a neat premise—a pop-punk band breaking into a shuttered music venue where a fellow band was trampled in a fire years earlier—but the shrieking, insufferable characters and migraine-inducing camerawork make it a challenging watch.

Thankfully, this is followed up by the most successful among the lot: “Suicide Bid,” directed by horror veteran Johannes Roberts (The Strangers: Prey at Night). Ally Ioannides stars as Lily, a college freshman applying to a mean-girl sorority. Smelling her desperation, her new “sisters” decide to play a cruel prank on her under the guise of an initiation, tricking her into letting them bury her alive—but not before telling her about a similar initiation that led to a disappearance. What follows is mostly predictable, but the nasty premise and creepy effects work raise it above the rest.

At the centre of the anthology is “Ozzy’s Dungeon,” a grotesque comedic tale from artist Flying Lotus (Kuso). Steven Ogg plays the slimy host of a zany game show for kids that promises to grant winners their wish—any wish. But when a contestant (Amelia Ann) gets horrifically injured running the obstacle course, her mother (Sonya Eddy) decides to subject the host to a taste of his own medicine. After eliciting some big laughs at the outset, “Ozzy’s Dungeon” lags in the middle, the pacing making it feel overly long. But stick around for the return to the titular dungeon, because this segment still has a surprise or two up its sleeve.

Love it or hate it, “Ozzy’s Dungeon” is certainly more memorable than the penultimate segment, “The Gawkers.” Directed by Tyler MacIntyre, who helmed the underrated Tragedy Girls, this segment about a group of teenage perverts spying on the hot girl next door is serviceable, but nothing special.

Vanessa & Joseph Winter (Deadstream) take us home with “To Hell and Back,” which sees two friends (Winter and Archelaus Crisanto) documenting an occult ritual on New Year’s Eve. The cult wants to summon a demon, but something goes wrong and the friends get sucked into hell instead. What follows is a plot-light but laugh-heavy jog through the underworld as the men attempt to hitch a ride back home. Melanie Stone’s Mabel makes the segment, channelling Gollum to great effect, and the creature work is fun and inventive enough to end the anthology on a high note. 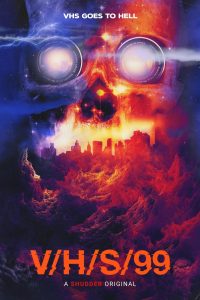 Unlike other entries in the franchise, V/H/S lacks a cohesive wraparound story, opting instead for a child’s stop-motion skits with their toy soldiers. This decision isn’t necessarily a bad thing, since the wraparounds are often the weakest elements of their respective films, and the skits are surprisingly charming, but the lack of a final toy soldier story before the end credits makes the anthology feel slightly incomplete.

V/H/S/99 might be missing an unmissable segment, but what’s here is more enjoyable than not. It may lack the rewatch appeal of its predecessors, but it’s frequently funny and sometimes scary—perfect for checking out among friends.