A bittersweet send-off descends into a body horror nightmare in Swallowed, the latest horror film from writer-director Carter Smith (The Ruins).

The first half of Swallowed is phenomenally tense. Malone is an intimidating presence, contrasting starkly with Koch’s teary-eyed Benjamin. As they drive through the night, Koch oscillates between grim determination and anger at the situation he’s been put in, while still managing to convey his character’s deep feelings for his friend. By the time we see something inhuman wriggling around in Dom’s underwear, we’re primed and ready for the body horror to kick into high gear.

Except, it doesn’t. Beyond sightings of a few slimy little creatures (which are, to the film’s credit, nice practical effects), Swallowed’s body horror remains teasingly restrained. Instead, the tone shifts into different territory altogether with the arrival of Mark Patton’s Rich.

The documentary Scream, Queen: My Nightmare on Elm Street! detailed Patton’s exit from Hollywood following his treatment in A Nightmare on Elm Street 2 way back in 1985. In Swallowed, he lets us know what we’ve been missing out on all these years. Rich is a predator through and through and Patton plays him with relish, tapping into queer villain stereotypes to deliver a fresh take on a crime overlord. The tonal shift happens a little too abruptly, but Patton’s presence is so electric that you can’t look away. 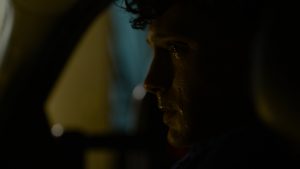 But what is here is solid, anchored by strong performances from the small cast. The sudden shift into campier territory will likely hold more appeal for queer audiences, but Patton’s gleefully evil performance is an absolute joy to watch. A transgressive, scrappy little film, it’s the kind of queer horror cinema we don’t get enough of anymore.