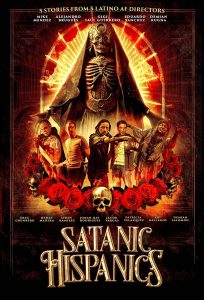 Horror anthologies are only as strong as the sum of their parts, and it’s rare to find one without a weak link. Satanic Hispanics—which world premiered at this year’s Fantastic Fest in Austin—is one such film, delivering four fun and scary segments held together by an equally enjoyable wraparound story.

The brainchild of five horror filmmakers from across Latin America, Satanic Hispanics taps into its team’s cultural heritage to tell stories that feel cohesive despite their wildly differing tones. The wraparound, directed by Mike Mendez (Big Ass Spider!), introduces us to the character of The Traveler (Efren Ramirez), our guide through this bloody affair. After being found by police at a horrific crime scene, he’s taken into the station for questioning, where he regales them with strange supernatural tales.

Ramirez strikes the perfect balance between world-weariness and wry, knowing humour in his portrayal of The Traveler, making him feel much older than he looks. It’s a character that has a lot of miles left in him, leaving Satanic Hispanics wide open for a sequel—and after you see the explosive conclusion to the wraparound story, featuring a jaw-droppingly cool creature design, you’ll be excited to see what roads The Traveler has yet to walk.

As for the segments themselves, Demián Rugna (Terrified) kicks us off with “Tambien Lo Vi,” a story that amuses and horrifies in equal measure. Demián Salomón plays Gustavo, a whiz with a Rubik’s Cube who’s obsessed with patterns and algorithms, so much so that he’s uncovered one that unlocks a portal in his hallway. While questions like “why” and “how” immediately come to mind, Rugna quickly distracts us with sudden, unsettling scares and buckets full of blood and gore.

Eduardo Sánchez is up next with a segment that feels as tonally distinct from his filmmaking debut, The Blair Witch Project, as it’s possible to be. Sánchez is here to deliver big belly laughs with “El Vampiro,” which follows a vampire (Hemky Madera) who uses Halloween as an opportunity to drink like there’s no tomorrow. Unfortunately for him, there might not be, because he’s far from home and the sun is rising sooner than he thinks. “El Vampiro” leans heavily into slapstick to tell an endearing story that’s surprisingly warm-hearted, despite all the arterial spray.

Gigi Saul Guerrero (Bingo Hell) drags us back into grislier horror territory with “Nahuales,” leveraging Mexican folklore to brutal effect. Guerrero shot the segment in the jungles of Mexico, giving the witchy proceedings an air of deep authenticity, and her heavy focus on dread and torture ensures that the anthology never allows us to get too comfortable.

The final segment is “The Hammer of Zanzibar,” from director Alejandro Brugués (Juan of the Dead). Brugués takes the comedic route here, adding Raimi-esque flair for a campy, cackling good time. Jonah Ray Rodrigues stars as Malcolm, who goes for dinner with his ex—except she’s not his ex. The reveal of the titular hammer alone is worth the price of admission, and Brugués offers up plenty of action in addition to chuckles.

Satanic Hispanics is a horror anthology that others should aspire to be, allowing its filmmakers to share their unique voices and create something truly special. It doesn’t always fit together perfectly, with The Traveler’s reasons for telling certain tales sometimes feeling a little murky. But all the blood-spattered pieces are here, and the picture they make is sure to entertain.