A bullied young woman turns the tables on her tormentors in Piggy, a horror film where the psycho killer on the loose is the least of its protagonist’s problems.

In writer-director Carlota Pereda’s feature-length adaptation of her short film of the same name, Laura Galá stars as Sara, a plus-size teenager working in her family’s butcher shop over a long, uncomfortably hot summer in Spain. Even there, she can’t escape the cruel barbs of her bullies, who use social media to amplify her humiliation. A trip to the town pool results in another round of merciless harassment, culminating in a mortified Sara being forced to walk home in the blazing-hot sun in nothing but her bathing suit. But along the way, she stumbles upon a curious scene: a stranger forcing her bullies into the back of a van and driving away.

Piggy is a movie about choices, and about how easy it is for our moral compass to be overruled by competing factors like the desire to fit in or get revenge. Early in the film, it becomes clear that one member of the mean-girl clique, Claudia (Irene Ferreiro), isn’t exactly comfortable with the way Sara is being treated. Yet she never intervenes, merely frowns sympathetically from the sidelines as her friends nearly drown their victim using a pool net. Similarly, Sara doesn’t intervene or say anything when Claudia and the other girls are snatched, bloody and screaming, right in front of her.

Pereda isn’t interested in absolutes, instead revelling in the murky moral grey area of her story. The level of cruelty Sara is subjected to is harder to sit through than any of the film’s gore. Combined with Galá’s raw and vulnerable performance, it makes us empathise with the character even as her lie about what she saw (or rather, didn’t see) gets out of hand and starts impacting the people around her. She feels guilty about what she’s done, but part of her still wants her bullies to bleed.

This moral ambiguity is further complicated by Sara’s growing infatuation with the killer, who starts to reciprocate her affection in a way that feels suspiciously like the wish fulfilment of a lonely young woman. We know it’s not healthy, yet given what she’s been through, it’s understandable that Sara’s blossoming sexuality has become tainted by and tangled up in violence. Even her home is not a safe space thanks to her mother’s unsympathetic attitude towards her weight. It’s no surprise that she seeks comfort and affection in all the wrong places. 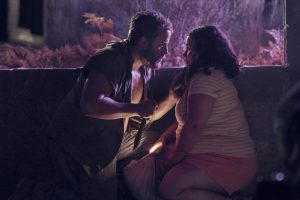 Using a claustrophobic aspect ratio and sticky colour palette, Pereda and cinematographer Rita Noriega trap us in Sara’s discomfort and refuse to let us breathe. In doing so, they perfectly capture the feeling of being an outcast in a small town where there’s nowhere to hide. We never learn a lot about the killer picking off the town’s youth, but we don’t need to. Above all else, he represents Sara’s twisted fantasy, and it’s the way she processes that fantasy that makes Piggy as fascinating and unpredictable as it is.