From the opening scene, the spectre of motherhood looms large over Huesera, the striking feature debut of director Michelle Garza Cervera. Climbing the steps toward the Virgin of Guadalupe, Valeria (Natalia Solián) catches a glimpse of the enormous shrine through the trees. She and her mother are making the pilgrimage seeking a blessing: Valeria and her husband, Raúl (Alfonso Dosal), are trying to conceive. But it quickly becomes clear that one person in this relationship is far less enthusiastic about the idea than the other.

Co-written by Cervera and Abia Castillo, Huesera is a film that explores what happens when a woman doesn’t want children but wishes she did. Married life and motherhood represent the safe and comfortable option for Valeria; they will make her family happy and allow her to live in a beautiful modern home, a far cry from the dingy apartment occupied by her former flame Octavia (Mayra Batalla), who’s still living the wild punk lifestyle that Valeria left behind. At times, it seems Valeria has almost convinced herself she’s making the right choices. But as it has a way of doing in horror films, that which has been repressed soon rises to the surface as Valeria starts seeing visions of a malevolent entity invading her home.

Unlike most pregnancy-based body horror films, the discomfort in Huesera stems less from the changes happening to Valeria’s body and more from those occurring in her life. She seems largely indifferent toward her swelling belly, but the loss of her workshop in place of a nursery clearly hurts. 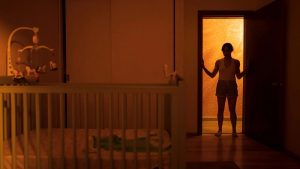 Solián delivers an exceptional central performance, conveying Valeria’s inner conflict through the smallest facial twitches even before it manifests through the character’s compulsive and increasingly painful-sounding knuckle cracking. Cervera frequently positions Valeria against mirrored surfaces in her apartment to highlight the two minds she’s in, while the recurring motif of spider webs reflects the tangled cage of societal (and self-imposed) expectations that she finds herself trapped in.

The spider-like entity that creeps into Valeria’s life along with the baby growing in her belly is used sparingly enough to remain breathtakingly creepy every time it appears. Once it gains access to Valeria’s inner sanctum—the home that was supposed to offer comfort and safety—the threat of when and how this creature might appear hangs over every scene. And while the crunching, bone-breaking sound design that accompanies it has been done before, Cervera cleverly uses it to further emphasise the physical manifestation of Valeria’s unease about her choices. She is being moulded into someone she doesn’t truly want to be and, as a family member comments about the act of giving birth, it feels like her bones are breaking.

Anchored by a nuanced and sensitive performance from Solián, Huesera delivers a message that women don’t hear nearly often enough. A powerful addition to the pregnancy horror sub-genre, it layers in themes of class, autonomy, and queer identity to create a rich web of ideas that will tangle you up and leave you vulnerable when the horror ramps up.