The film follows Nala (Paola Miguel), a 13-year-old girl whose younger sister, Luna (Ivanna Sofia Ferro), is becoming increasingly sick. The exact nature of this illness is unclear, but the family doctor warns parents Rebecca (Samantha Castillo) and Guillermo (Arap Bethke) that they should prepare for the worst. Desperate, Rebecca and Guillermo head out in search of an unconventional cure, leaving the children behind with their grandmother, Josefa (Ofelia Medina) in her crumbling house out in the country. But something is off about Josefa, and after hearing a chilling bedtime story from Abigail (Paloma Alvamar), the housemaid, Nala grows to believe that grandma may be a witch.

Despite its young leads, Evil Eye isn’t afraid to lean into its horror elements. The practical effects are stunning, delivering eerie, skinless witches and unsettling creatures. There are some real crowd-pleasing scares here, and the use of dreams and frightening bedtime stories allows the script (co-written by Ezban, Junior Rosario, and Edgar San Juan) to cast doubt about how much of what we’re seeing is real or merely the over-stimulated imagination of a child.

Medina’s gleefully mean turn as Josefa creates an atmosphere of discomfort that permeates the film, even before the horror ramps up. We all have a relative like Josefa, the grandmother who frightened us more than we cared to acknowledge and whose house we never wanted to go to as kids. Evil Eye taps into that feverish childhood fear, playing with staples of grandma’s house like the creaky rocking chair and mysterious bubbling pot on the stove to great effect. 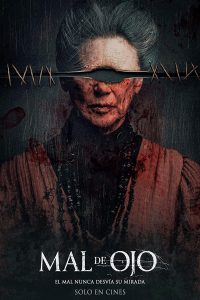 Protagonist Nala is less compelling. Miguel is a fantastic young actress, but the script lets her down. Nala is at a rebellious, borderline selfish age, but those layers of her character seem to fall away, almost forgotten, as the film wears on. It doesn’t help that the plot grows repetitive in the middle, with multiple scenes of Nala trying to escape through the surrounding woods. Attempts at a red herring also serve more to confuse the story than act as a satisfying misdirection.

A sumptuous modern fairy tale rooted in tradition, Evil Eye drips with style but stumbles a little in the substance department. The horror imagery is wonderfully ugly, feeling perfectly in line with the childhood lens we’re viewing it through. As a coming-of-age story, there are also some good lessons to be learned here, but a tighter edit might have made the road to them feel less rocky.