There’s a moment in the meet-cute opening of Attachment, the feature debut of writer-director Gabriel Bier Gislason, when I suddenly remembered I was watching a horror film. That would usually be a complaint, but here it is a testament to just how compelling the relationship at the heart of the film truly is.

Attachment follows Maya (Josephine Park), a Danish actress who is struggling to find purpose now her TV work has dried up. After a chance encounter, Maya falls head over heels for Leah (Ellie Kendrick), a Jewish academic from London. When Leah has a violent seizure that results in a broken leg, Maya decides to follow her new flame back to London, where Leah lives in adjoining apartments with her mother, Chana (Sofie Gråbøl). But something isn’t quite right at home, and the more Maya investigates, the more strained her relationship with Chana becomes. 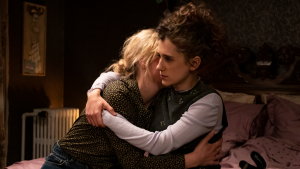 The horror in Attachment is subtle, with Gislason focusing more on the human story than the supernatural elements. There’s a Dybbuk buried in the film, but it takes a long time to come out and play, with Gislason dangling the threat over us to create tension while deepening our investment in Maya and Leah’s relationship.

The film’s mythology is explained by Lev (David Dencik), a Jewish bookshop owner with ties to Leah’s family. The presence of Maya, as an outsider to this culture, ensures the exposition doesn’t feel too forced, and the script injects enough humour to keep Maya’s conversations with Lev entertaining. But while the use of Jewish folklore makes Attachment feel fresher than many in the recent crop of possession films, it still falls back on familiar tropes. Kendrick has a lot of fun when the Dybbuk takes hold, with her sweet and relatably awkward performance giving way to something dark and cunning, but the frights wrung out of the possession are minimal. 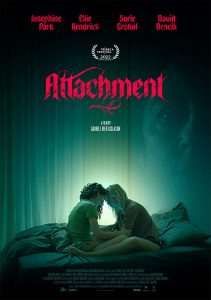 It’s the dynamic between the three central characters that makes Attachment so memorable. Gislason taps into and subverts stereotypes about overbearing Jewish mothers, with Gråbøl expertly earning both our understanding and our frustration at how Chana is behaving. The resolution feels a touch easy, deflating some of the tension the film has ratcheted up, but the message behind it is earned.

Attachment struggles a little in its third act, but it’s a worthy entry in the Jewish and LGBTQ+ horror subgenres. It’s more sweet than scary, but sometimes, that’s enough.