Embers is a science-fiction drama that takes the audience on a trip to a post-apocalyptic world where humans no longer have the ability to remember their past or form new memories. It’s an unsettling, but tender insight that follows a variety of difference characters, their coping mechanisms and their experience with the mystifying condition.

Ahead of Embers’ screening at Fantasia Festival, SCREAM’s Jessy Williams caught up with the film’s director Claire Carré to discuss science-fiction, the nature of memory and the meaning behind the film’s mysterious title. 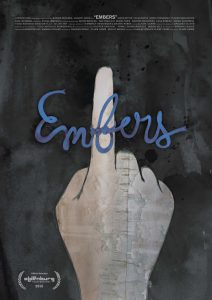 SCREAM: Have you attended Fantasia Film Festival before?

Claire: No this is my first time, but I’ve heard it’s amazing so I’m very excited.

SCREAM: How do you feel about your film screening on the 22nd July selling out? That’s pretty fantastic.

Claire: I know! I saw that and was like, “Woah! That’s awesome!” I’m definitely very excited.

SCREAM: Are you planning to check out any films while you’re there?

Claire: Yeah, I’m not sure which ones I’ll be able to get into, but I have a little cheat sheet of the films I want to go to. There are a lot of films that I want to see, but I won’t be there for. I want to see Realive and The Alchemist Cookbook. Some films that are playing when I’m not there, but I’m hoping to catch at some point are Americana and The Lure. I’m really into sci-fi and horror if it’s not too scary *laughs*.

SCREAM: The scarier the better!

Claire: *laughs* When I was younger I wasn’t allowed to watch horror films, so I have a low tolerance for things that are scary. I think there are some 10-year old horror buffs out there that are watching stuff that I’d be like, “AAAHHH!” about.

SCREAM: So, what is Embers about?

Claire: I would say it’s about the relationship between memory and identity. It’s a positive film. I know that it’s post-apocalyptic, but I think it’s only using that as the background. I didn’t set out to make a post-apocalyptic film, I set out to make a film about memory. I thought, “What if everybody doesn’t have memory. What would happen to the world?” I did a ton of research when I was working on the film and one of the books was called “The World Without Us” and it questioned if people disappeared right now, what would happen to the man-made things in the world. It’s all facts and it was really amazing to me how easily things would fall apart without humans.

SCREAM: Where did the idea for the film come from?

Claire: Embers is my first film, so I was trying to think of something that would be really important to me, but also unique. I kept coming back to my memory. Even memories that I’ve shared with other people are unique to my brain and the way that it remembers and processes them. My memory of a specific event is going to be different to the other people that I was with. My next thought was then, what if I don’t have that? Who would I be?

SCREAM: What has the response to Embers been like so far?

Claire: It’s been really great. I’ve been trying to go to as many film festivals as possible in person, because it’s really nice to present the film directly to the audience. My favourite part is doing the Q&As because I get to say, “Hey! What did you think of my movie?” and hear what it made them think of or what questions it brought up, so that’s been really great.

SCREAM: Did you look to any films for inspiration when creating your post-apocalyptic world?

SCREAM: Did you draw on any of their stories for specific characters in the film?

Claire: I mostly drew on how they dealt with it, because the research I was doing and the characters I were developing happened simultaneously. We wrote a version, then I would do some research and then we’d change things. It went back and forth. I was very inspired by Clive Wearing and his wife Deborah. I read her biography which was about being married to someone with amnesia and how they’ve managed to maintain their relationship for decades, when one of them only has a memory that lasts 1 minute. Their love transcended his illness, which I found very beautiful. 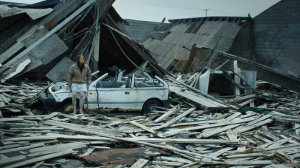 SCREAM: We don’t have to remember that much anymore with the advancement in technology and social media allowing us to document everything. Did you perhaps want to explore life before we had that ability?

Claire: It’s a funny thing, because I take videos and photos with my phone and I certainly have friends and family members that do this more than I do. I think the question it raises is how often do you actually go back and look at those photos? There are photos that I’ve taken that I’ve never looked at, but there was this idea that is was important to capture it.

SCREAM: It’s easy to say the film is promoting the importance of memories, but is it about more than that?

SCREAM: What would you do if you were Miranda?

For me, I had a really tough time deciding and I think it depends on the day. One idea Embers raises is that perhaps it’s freeing to not be bogged down by your memory and knowing things, because it opens up the characters to be able to experience things in the moment.

SCREAM: What is the significance of the film’s title?

Claire: It has a couple of different meanings. One is the idea that after the fire dies down and when their memories are gone; there are still some embers within them. Maybe that their nature or their core self is still lit. On a broader, societal level, they’re like the remaining embers of society, because most people have died. On a fun, typographic sense, if you get rid of the first set of letters from remembers you’re left with “embers”.

SCREAM: How do you want to affect audiences with this film?

Claire: I think my goal is for people to walk away thinking about their relationship to their own memory, what memories are important to them and the kind of person they might be without their past. We’ve had a great reaction from an older audience that have really connected with the film and that’s been really meaningful. People who have had problems with their memory or been caregivers to people with memory issues like dementia, have connected with the film in a way that makes me very happy.

My tonal goal was to be a bit contemplative, not to scare you or make you stressed. I think I was trying to draw on what your experience would be. How does it make you feel and how would you cope with it? A lot of the characters deal with it in a lot of different ways.

SCREAM: Do you think that Embers is a positive film?

Claire: I think that one thing that proves the film is ultimately optimistic is seen in the characters. Even though they are without the ability to form new memories and they don’t remember what happened an hour ago, you don’t feel that their actions are meaningless. Their lives can still have meaning in the moment and they can still feel love or fear and experience beauty or awe. Just because they can’t remember the past, doesn’t mean that the present isn’t important for them. It probably matters more for them than for us, because for them it is everything.

SCREAM: How did you tackle writing the script for Embers? 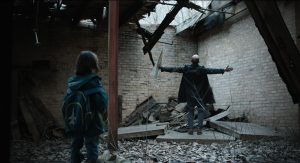 Claire: I wrote it together with my husband. We didn’t exactly steam-roll through it; we worked through it on and off for a year. It’s a very Indie film and part of the plan from the beginning was to craft a story that we could shoot in sections as we raised money. Raising money is not my strong suit and that was really challenging. I was really fortunate to be working with a great cast and crew, so that was a pleasure. Making a science-fiction film as independent film-makers on a small scale was definitely challenging.

SCREAM: Did you face any challenges during the shoot? I imagine that you had to go out very early in the morning to make sure it was quiet.

Claire: The most challenging area for sound was the abandoned city which had the abandoned lovers, Chaos’ story and the small boy with the guardian. We shot that in abandoned buildings in Indiana and it was below freezing. There was no electricity, heat and sometimes no walls or ceilings. We also had to do a lot of sound design work to get rid of the traffic.

SCREAM: How did you manage to get the perfect balance between an unsettling, but tender, atmosphere?

Claire: For me, any time things aren’t working how they expect to work – especially with human bodies – I think that is really unsettling. Knowing things, but not being able to access them or to feel lost and not be able to get a grasp on information is a very unsettling, weird and disconcerting feeling. I think that is inherent in the experience of having amnesia.

SCREAM: It’s a fantasy film that’s grounded in such a credible reality; I think that’s the most unsettling thing about Embers.

Claire: I’m really glad to hear you say that, because it’s a science-fiction film but I did try to base everything on actual, medical fact to give it some consistency.

SCREAM: Your cast is very international, was this intentional?

Claire: The film takes place in an anonymous city that could be anywhere, so I wanted to give the feel of a global epidemic by having the characters come from very different backgrounds. We have a couple of Americans, but also Iva Gocheva who plays Girl is Bulgarian, we have two actors from Spain in the bunker and the little  boy Silvan Friedman lives in America but his first language is German. We shot a big part of it Poland, so yeah I wanted to give it an international feel.

SCREAM: Good luck with the film and thanks so much for your time, Claire!

Embers screened on 22nd July and will show again on 1st August 2016 at Fantasia Film Fest. We will leave you with the evocative and striking trailer for the film below.