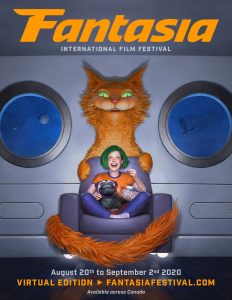 The Fantasia International Film Festival will be entirely virtual this year—and the final, mammoth wave of programming has just been revealed!

Accessible across Canada and geo-locked to the country, the 24th edition of the famed genre festival will run from August 20th to September 2nd and will maintain unique film admittance quantities in line with the cinema experience. The third wave of programming is chock-full of exciting films, events, panels, and talks, headlined by a masterclass from none other than John Carpenter himself, who will also be awarded a Lifetime Achievement Award and perform his latest single.

In total, this year’s programming is packed with more than 100 feature films and over 200 shorts, including many fascinating horror titles. Here are some of the highlights from the third wave! 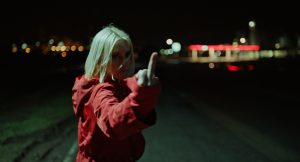 Johnnie To’s Chasing Dream (Canadian Premiere): Tiger and Cuckoo are a match made in heaven. Both involved with moneylenders, one is an over-enthusiastic rising star in the MMA world; the other a resourceful, aspiring singer on-the-run who will stop at nothing for a spot on ‘Perfect Diva’! Jacky Heung and Keru Wang star.

Jorge Michel Grau’s Perdida (International Premiere): Mexican filmmaker Jorge Michel Grau (We Are What We Are) enters into the realm of Hitchcock and De Palma with this remake of Andrés Baiz’s acclaimed 2011 feature The Hidden Face. José María de Tavira, Paulina Dávila, and Cristina Rodlo star.

Daria Woszek’s Marygoround (International Premiere): In this beautiful, unsettling dark comedy, Mary (Grazyna Misiorowska) makes the decision to begin hormone therapy to ease the transition into menopause. Meanwhile, the sudden arrival of her niece coincides with an awakening—one of burgeoning sexuality, bravery, and curiosity. Maybe it’s the hormones… or maybe it’s something far more mystical and powerful.

Yuichi Fukuda’s Wotakoi: Love Is Hard for Otaku (North American Premiere): Narumi is starting a new job and doing everything she can to hide the fact she is an otaku, but one of her new colleagues is a childhood friend who knows all about her passion for manga and anime. Mitsuki Takahata and Kento Yamazaki star.

Bao Tran’s The Paper Tigers (World Premiere): Three childhood Kung Fu prodigies have grown into washed-up, middle-aged men one kick away from pulling their hamstrings. But when their master is murdered, they must juggle their dead-end jobs and dad duties to overcome old grudges and avenge his death.

Minoru Kawasaki’s Monster Seafood Wars (International Premiere): When a disgraced scientist who now works at his dad’s sushi shop gets into a minor bicycle accident, he ends up creating a huge-but-delicious problem. Before you can say “colossal calamari”, a squid, an octopus, and a crab—each as big as buildings—are wreaking massive kaiju havoc all over Tokyo in this hilarious and heartfelt monster film employing old-school techniques.

Jeanette Nordahl’s Wildland (North American Premiere): In Danish director Jeanette Nordahl’s stunning debut, Ida is taken in by an estranged aunt and her three sons after her mother’s abrupt death. She soon discovers that her new family are local mafioso, and things suddenly go south when a violent murder challenges the family’s loyalty to each other.

Yuen Kim-Wai’s Legally Declared Dead (North American Premiere): An insurance agent suspects his client may have murdered his own son to collect the insurance money. As he investigates the suspicious death, he begins to be met with threats on all sides. Anthony Wong stars in the film, which is based on the Japanese novel Black House.

Justin G. Dyck’s Anything for Jackson (World Premiere): Canadian genre royalty Sheila McCarthy and Julian Richings star in this clever, funny, and delightfully mean-spirited horror tale of elderly Satanists carried way over their heads in the name of love.

Luk Yee-Sum’s Baby: The Secret Diary of a Mom to Be (Canadian Premiere): As far as Carmen is concerned, she has it all: a handsome basketball-star husband, a great job with an exciting promotion in reach, and a group of lifelong friends that are closer than family. But she’s about to get one thing she didn’t plan for—a baby on the way. Dada Chan stars.

Christian Alvart’s Free Country (Canadian Premiere): Two years after the German reunification, a pair of out-of-town detectives begin to uncover the dark secrets of a lawless backwoods area in this tense remake of Alberto Rodriguez’s Marshland.

Takeshi Kushida’s Woman of the Photograph’s (Quebec Premiere): Solitary photographer Kai is afraid of women, but it doesn’t keep him from shamelessly retouching their photographs when asked. On a trek through the forest, he encounters a model, Kyoko, who soon asks him to retouch hers. As their relationship grows, Kai feels a rare pang of responsibility, motivated for the first time to challenge his vindictive perception of women. Hideki Nagai and Itsuki Otaki star.

Quinn Armstrong’s Survival Skills (International Premiere): Designed like an 80s police-training video, the feature debut of writer-director Quinn Armstrong is simultaneously a throwback to a bygone age and very much a film for the current moment. Vayu O’Donnell and Stacy Keach star.

Sam Quah’s Sheep Without a Shepherd (Quebec Premiere): When Lee’s teenage daughter accidentally kills a classmate who is blackmailing her, she unfortunately discovers that the deceased’s mother happens to be a merciless cop. Armed with an arsenal of film knowledge and wits, Lee devises the ultimate alibi, ready for every counter-move that awaits his family. Joan Chen (Twin Peaks) stars in his relentless cat-and-mouse thriller.

Fung Chih-Chiang’s A Witness Out of the Blue (Canadian Premiere): Three months after a botched robbery, Wong, the mastermind behind it, is now a prime suspect for the murder of one of his teammates. Trying to clear his name, Wong instead falls into a complex web of betrayal and collateral damage, while a detective scrambles to piece together the puzzle with the help of a talking parrot.

Kim Seung-woo’s Bring Me Home (Quebec Premiere): Six years after her son’s disappearance, Jung-yeon goes to a small fishing village to track him down. But nothing could have prepared for what she discovers upon arrival. Lee Young-ae (Lady Vengeance) stars.

Rinio Dragasaki’s Cosmic Candy (Canadian Premiere): Anna is an eccentric supermarket cashier living alone in her parent’s roomy apartment in Athens. When the father of the 10-year-old girl next door suddenly goes missing she finds herself forced to take responsibility for the child, and take her in herself.

Zoé Wittock’s Jumbo (Quebec Premiere): Socially awkward Jeanne is in love with an amusement park ride in this beautifully strange romance is a coming-of-age “coming out” story starring Noémie Merlant.

Tsutomu Hanabusa’s Kakegurui (Canadian Premiere): Welcome to Hyakkaoh Private Academy, where gambling determines the school’s hierarchy. But the status quo is about to be shaken up by the arrival of a new student who is ready to take on the head of the powerful student council.

Ryan Spindell’s The Mortuary Collection (Quebec Premiere): Clancy Brown stars as a sinister mortician chronicling the strange history of his town through a series of morbid tales in this stylish, colourful, and ghoulishly fun horror anthology in the vein of ‘70s Amicus Productions.

Tim Mielants’ Patrick (Canadian Premiere): Making his feature film debut after a television career spanning the likes of The Terror and Legion director Tim Mielants paints a down-to-earth portrait of a man struggling to deal with his feelings—and of a micro-society struggling to deal with him. Kevin Janssens (Revenge) and Jemaine Clement (What We Do in the Shadows) star. 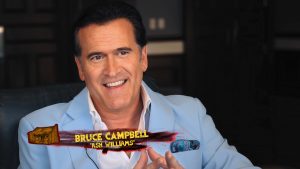 Other highlights from the HUGE third wave of programming include an artist talk with Mike Flanagan (Doctor Sleep, The Haunting of Hill House), bad career advice from Simon Barrett (writer of The Guest and You’re Next), and much more.

Visit fantasiafestival.com to see the full line-up and get tickets.