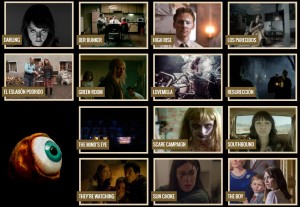 That’s right! We’re just 2 weeks away from the 22nd Edition of the FANT Festival now!

Organised by Bilbao’s City Council, this year’s line-up is a cracker with an Official Section serving up 14 international features – 4 Spanish premières and 1 European première – and 25 short films up for competition, eleven of which have been submitted by Basque filmmakers.

So make a note in that diary of yours: FANT is coming at you 6-13 MAY like lightning, it’s frightening.

This year, Gonzalo López-Gallego gets the ball rolling with his latest project, The Hollow Point. This, a European Premiere, will screen as part of the opening ceremony taking place on Friday, May 6, at 20:00, at the Campos Theatre. Gonzalo López-Gallego’s big break came at the hand of the Weinstein brothers with Apollo 18, which he swiftly followed up with Open Grave, the latter taking home the Best Screenplay Award at FANT this time two years ago.

FANT22 will also play host to a special screening of the sci-fi thriller Rendezvous, the debut feature from Guillermo Julían and Román Santiago (both hailing from Bilbao).

Another not-to-be-missed highlight is the special screening of the Jaume Balagueró-produced Summer Camp, directed by Alberto Marini, who will be putting in an appearance on Wednesday, May 11.

Running in parallel to the official line-up, festivalgoers can enjoy a wide selection of free screenings in FANT’s Panorama Strand, together with other special screenings of genre classics and Basque short films.

THE OFFICIAL SECTION
This year, 14 feature films (including 4 national premières and 1 European première) will be in the running to take home the 2016 FANT Best Feature, Best Screenplay and Best Director awards.

The European première this year is Resurrección (Argentina, 2016), the third feature from Gonzalo Calzada (screening May 8), which is currently making waves in Argentine cinemas since its theatrical January 7 release.

All films will be screened in their original language with Spanish subtitles. In addition, The Rotten Link, Darling, Der Bunker and Sun Choke will also include Basque subtitles.

SUPPORTING SHORT FILM
Shorts will, once again, play a major role at FANT22, in the Panorama section, the new FantasticPhone Movistar+ competition for shorts films shot on phones and, of course, in the Official Section, with two € 3,000 prizes going to the best short films selected from the Official Section (as chosen by the jury and festivalgoers), and a third prize of € 2,000 going to the Best Basque Short Film.

The awards ceremony will be held as part of the festival’s closing gala at the Sala BBK – Gran Via, on May 13, at 20:00. Said gala will include a screening of the short film Graffiti, the latest project from director Lluis Quiles, and the awards ceremony will be followed by a special screening of Baskin with the film’s director, Can Evrenol, in attendance to receive this year’s FANTROBIA Emerging Talent Award.

We could go on and on as the line-up is immense so the best thing to do now is leave you with the official FANT trailer below. Enjoy, and we hope to see you there!