With little over a month left to impatiently wait for this year’s Bilbao Fantasy Film Festival – FANT 22 (5-12 May), the organisation has prepared a wide variety of preliminary screenings and parallel events – virtually of which are free of charge. With every intention of getting the city revved up for this year’s festivities, these PRE-FANT activities will take place from the 24th through till the 28th of April at the Sala BBK, Bidebarrieta Library and Bilbao’s emblematic Guggenheim Museum.

The A Contracorriente Sitges Tour returns once more as part of the PRE-FANT proceedings, showcasing five of the defining films screened at last year’s Sitges Film Festival. The Tour in question is an initiative organised by production/distribution company A Contracorriente Films designed to give a number of genre films the big screen treatment they deserve up and down the country. And this year’s line-up is pretty damned phenomenal: Andre Øvredal’s “The Autopsy of Jane Doe” (with Basque and Spanish subtitles), Hideaki Anno and Shinji Higuchi’s “Shin Godzilla,” Mike Flanagan’s “Before I Wake” (with Basque and Spanish subtitles), Sang-ho Yeon’s “Train to Busan” and Colm McCarthy’s “ The Girl with All the Gifts”. Festivalgoers can catch these films at Bilbao’s Sala BBK together with a special preview screening of Sophia Takal’s “Always Shine” in collaboration with Sony Pictures. And ff that wasn’t enough to get excited about, entry to all 6 films is free until there’s no more room at the inn.

The next event makes me feel older than the hills, but Paul Verhoeven’s cult classic “Robocop” turns all of 30 years young this year and FANT will be getting all nostalgic with a celebratory conference headed up by Toni Garzón Abad, director of “Lo mejor de cada casa (Una semana en el parque)” (“The Best of Each House “A Week in the Park)”). So, kindly uphold the law and head over to this at 19:30 in the Bidebarrieta Library. And you don’t even have to buy this for a dollar as the whole thing is absolutely free.

And, to bring this year’s PRE-FANT proceedings to a grand close at 8pm on the 28th of April, a special preview of Rosemary Myers “Girl Asleep” will be screened in the Guggenheim Museum auditorium to tie in with La Aventura’s theatrical launch of the film in Madrid and Barcelona. This will be rounded out at 10pm with a “jurassic” DJ set from Carlos Bayona (brother of J.A.) as part of the Art After Dark programme. 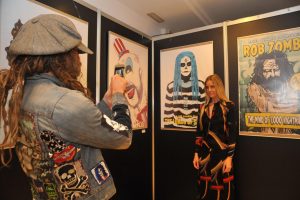 EVEN  MORE FANT
Finally, as part of parcel of the festival itself, FANT will also play host to “The Vault of Rob Zombie. A Comic Tribute” exhibition which attendees can peruse in the AzkunaZentroa Multi-Purpose Hall from the 5th through till the 12th of May. This Borja Crespo-curated exhibition boasts quite the collection of Rob Zombie-inspired artwork designed by 16 different illustrators all working in the film industry in some shape of form including the likes of M.A. Martín, David Rubín, Manuel Bartual, Koldo Serra, Luis Bustos and Mamen Moreu.

The full line-up of shorts, feature films and guests is right around the corner, but until that news rolls out, we’d like to share with you a few of the unforgettable highlights from last year’s event…