A deeply unsettling air permeates the new trailer for Marrowbone, the directorial debut from The Orphanage writer Sergio G. Sánchez. The film is released in US cinemas, On Demand, and through Amazon and iTunes on April 13th, from IFC. 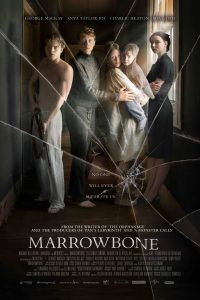 Starring as it does some of the most promising young genre talent around, Marrowbone is most definitely something to be excited for. Seemingly on her way to becoming the biggest star in modern horror, Anya Taylor-Joy (The Witch, Morgan, Split) headlines opposite Stranger Things’ Charlie Heaton, Mia Goth (A Cure for Wellness, the upcoming Suspiria remake) and George MacKay (Captain Fantastic, TV’s 11.22.63).