It was announced back in April that the USA Network were to renew Falling Water for a second season and finally, an airdate has been revealed together with this teaser for the show’s return.

Executive produced by The Walking Dead’s Gale Anne Hurd, Falling Water follows three strangers – Taka (Will Yun Lee, Hawaii 5-0), Tess (Lizzie Brochere, American Horror Story: Asylum), and Burton (David Ajala, Fast & Furious 6) – who can all affect the waking world through their dreams, but when they realise that others too have this ability, they seek to eradicate those factions who use their powers for evil. 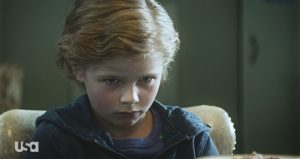 As per the press release, “Season 2 picks up with Taka, Tess and Burton struggling to protect themselves and their loved ones against an unknown entity that manipulates nightmares, bringing chaos and death into the waking world. The fate of the humanity rests with these gifted dreamers.”