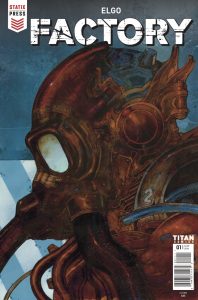 Much like French horror to the horror genre, French comics are the low-flying, high octane works of the comic genre. While they may not be as popular as Marvel or DC beat-em-ups, the French have had an undeniable effect on modern comics, most notably with the creation of Heavy Metal and mature-themed comics that helped steer the genre away from strictly ‘kiddie’ entertainment. Even now, French work is still seeing a fairly large readership and, along with its neighbours Belgium, Spain, and Italy, has managed to carve itself a comfy little niche in the massive world of comic readership. The most current, and perhaps the most bizarre, example is the recently translated Factory. Written and drawn by Elgo, a multi-talented artist who has worked from comics to animation to conceptual design, Factory is best described as the dystopian future where Mad Max meets Fallout, at least that’s what the press release says. But it’s much more than that. It’s a world where magic and science come head to head in a fight to the death and humanity (along with some talking monkeys) get caught in the middle. Throw in some wonderfully detailed and coloured work and you got yourself a hell of a read.

Factory starts off innocently enough with a psychic foetus that dies while predicting the coming of a pig-man to usurp the great Lord Gucco. Lord Gucco, as expected, doesn’t take the news happily and is eager to protect himself from this coming enemy. You see, in the world of Factory, humanity has been reduced to mere handfuls that swarm the desert and Lord Gucco is their supreme king, backed by the power of the now dead ‘precog.’ He doles out food and water as he sees fit while hoarding all the good stuff for himself. While his fears may seem unfounded (after all, pigs went extinct many years ago), the comic pans to his exact problem, a man-pig cursed to wander the desert in hopes of finding a wizard to turn him back to being human. Joining him is a wandering pilgrim and a set of mad twins, each one looking for something out in the unforgiving landscape. But, just as they felt they were on the right path, hunger gets the best of the troupe and they quickly learn that not all talking monkeys are looking out for their best interest. Will they survive long enough to make it to the fabled Factory, the last outpost of civilisation, or will they die, rotting in the dry sun? 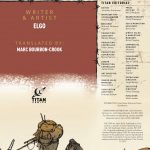 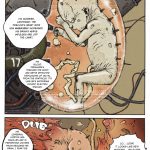 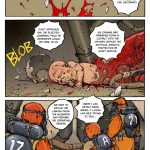 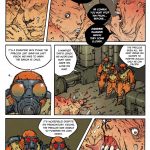 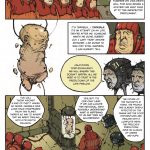 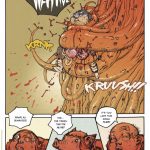 If that description left you scratching your head, you’re not alone. The comic completely forgoes any kind of prologue and drops the reader straight into its bizarre world. Though it’s not that uncommon to not have an introduction, starting off a comic with a mutating and then exploding foetus does demand a bit of explanation. But despite the sudden and un-apologetic drop, the reader quickly gets into the flow of the work. Elgo doesn’t flood the comic with made-up technology and frustrating future speak but instead treats it like any other work but has it set in the future. There is visual tech that he scatters throughout the work and some definitely interesting looking human/robot hybrids, but the comic is primarily a dystopian title which translates to more interesting fashion choices than anything else (sort of like Mad Max). Factory is also heavily text based and each page that has dialogue in it has a LOT of dialogue in it. This is something that is fairly normal with European comics and can be seen in the more well-known Adventures of Tin Tin and a majority of Heavy Metal work. It actually works for Factory as it forces the reader to slow down and enjoy each page while delving into the minds of each character. 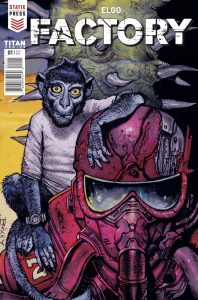 Speaking of characters, each characters is very unique from each other, in both looks and attitude. Each of the characters illustration is perfectly tailored to the characters attitude, cumulating in a rounded presentation of the main players. From the anxious, gluttonous Lord Gucco to the mysterious, quite man who wanders the desert in the last few pages, Elgo makes sure that the reader gets a full understanding of who’s who. Even that tricky monkey looks as stuck up as he acts. Elgo not only shows off his unique art style though the individual characters, but in the landscape and colouring work. He doesn’t shy from drawing out the expanse of the desert, colouring the landscape with soft peaches and blues alongside splashes ever-changing sand and wind. The only real complaint is his lack of background details when drawing a panel in closed quarters, though in reflection of the rest of his work, it’s just a nit-picky detail. All-in-all, it’s a solid work from a man who has had nearly two decades of experience under his belt.

If you’re interested in this strange tale of man-pigs and wandering minstrels, Factory #1 is out now through Titan/Statix Press. Of course, if you don’t feel like waiting for the full collection and can read French, the collected French version has been out for years. Either way, look for it on your local comic shelf!