Face Your Demons with the Trailer for The Cleanse 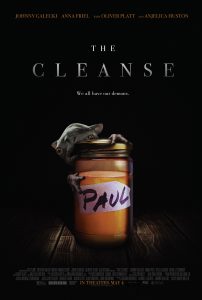 A darkly comic trailer has been released for The Cleanse and it shows Paul Berger – played by Johnny Galecki (The Big Bang Theory, Rings) trying to fix his imperfect life. He heads to a spiritual retreat where he undergoes a master cleanse, including drinking a few unpleasant drinks that lead to a body horror nightmare.

Originally called The Master Cleanse, the film screened at 2016’s FrightFest, so it’s great to see it finally getting a release. Vertical Entertainment plans to release the film in limited cinemas and on VOD on 4th May 2018.

The trailer showcases the film’s comedic and tongue-in-cheek side, but it also looks like it has a side of icky terror, where the treat offers more than the promise of a better life and the expulsion of bodily toxins. Yuck.

The Cleanse comes from writer-director Bobby Miller and also stars Oliver Plantt and Anjelica Huston. Be sure to catch the film this May in the USA.